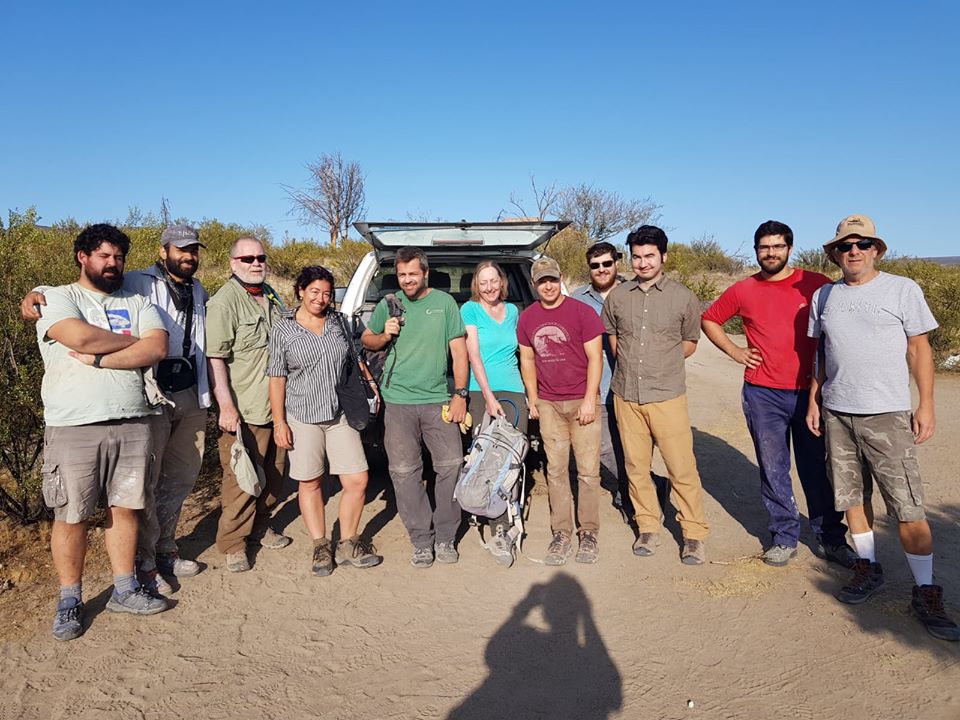 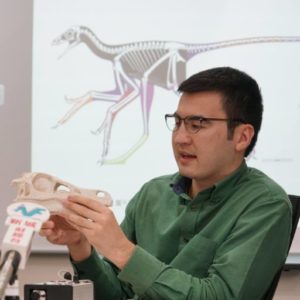 I’m a multi-disciplinary vertebrate palaeontologist from HK. I earned a BSc in geology from UCL in 2006 before progressing to an MSc in geoscience (palaeobiology) in 2007. I pursued a PhD on ‘the evolution and biomechanics of dinosaurian tails’ with Profs. Paul Upchurch and John R Hutchinson (RVC) completing in 2012.

My primary research interests are the evolution of dinosaurs (particularly of feathered theropods), fossil imaging (particularly LSF) and the evolutionary biomechanics of vertebrates (especially theropod flight). Much of my work focuses on the study of Chinese dinosaurs with Prof. Xiaoli Wang (Linyi University, Linyi), Prof. Xu Xing (IVPP, Beijing) and Prof. Xiaoting Zheng (Tianyu Museum, Pingyi). This includes past fieldwork in the Chinese Gobi desert that led to the discovery of the dromaeosaurid Linheraptor and the alvarezsaurid Linhenykus as well as important feathered dinosaur discoveries such as the asymmetrically feathered troodontid Jianianhualong and the first quantitative body outline to be reconstructed, based on Anchiornis.

I lead the Vertebrate Palaeontology Laboratory which includes 4 PhD students, a number of undergraduates and volunteers as well as an international group of research associates. I produced and instruct HKU’s award-winning prize-nominated free online course Dinosaur Ecosystems. I am the Assistant Dean (e-learning) of the Faculty of Science as well as the Outreach Committee Chairman and Advisory Board Secretary for the Department of Earth Sciences. 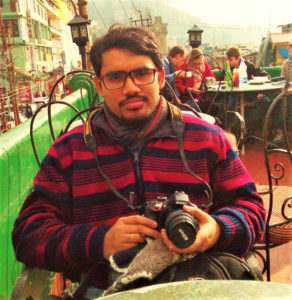 Arindam began working on the fossilisation of the pigment melanin at Bristol with Dr. Jakob Vinther. Melanin – the biological pigment that imparts colour to many organisms and is present in our own hair and eyes – has the exceptional ability to preserve over geological time scales and has become the centre of an exciting and cutting-edge field of palaeontological research. Melanosomes, the small sub-cellular vesicles that store the pigment melanin, have become key to the reconstruction of ancient colouration in exceptionally preserved fossil feathers in various non-avialan dinosaurs and early birds. Arindam’s Master’s dissertation at the University of Bristol titled ‘To be palaeo-melanosomes, or not to be?’ dealt with the validation of the ‘melanosome identity’ of fossil microbodies. The interpretation of microbodies in fossils as melanosomes has been criticised based on the morphological resemblance of these structures to rod-shaped and spherical bacteria, which they were originally interpreted as. His research presented strong evidence that supports the ’melanosome hypothesis’.

While the morphological diversity of modern and fossil avian feather melanosomes has been examined in detail, the evolution and diversity of melanosomes in the skin covering (integument) more generally and in primitive feather-like structures of non-avialan dinosaurs and related taxa remains acutely understudied. Arindam’s current research as a Hong Kong PhD Fellow 2017/2018 focuses on the preservation and evolutionary history of melanin-based colouration in dinosaurs and their close-relatives. 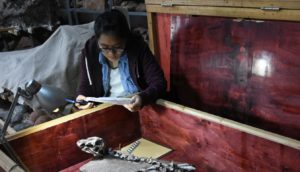 Fion received her undergraduate degree at the University of Hong Kong in 2013, double-majoring in Geology and Ecology and Biodiversity. At HKU, she was part of the VPL and completed two summer research fellowships with myself and Prof. Xing Xu (IVPP). One of the projects involved the first in-depth description of the Gigantoraptor mandible, which provided new insights into the evolution of oviraptorosaur jaws. With growing interest in these amazing animals, Fion completed a Palaeontology and Geobiology MRes at the University of Edinburgh in 2018. She studied the variation patterns of oviraptorosaur skull form and function under the supervision of Dr Stephen Brusatte and the late Prof. Junchang Lü (formerly of the Institute of Geology, Chinese Academy of Geological Sciences). In particular, Fion investigated whether feeding-related niche partitioning likely existed among the Ganzhou oviraptorid fauna in the Nanxiong Formation of southern China, which is one of the most diverse oviraptorid faunas in the world. 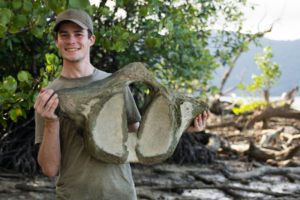 Luke is returning to the University of Birmingham for a PhD following a MSci degree in Palaeobiology and Palaeoenvironments. Throughout his four years of undergraduate study Luke was able to undertake a wide range of palaeontological research. He led a study and re-description of a collection of scientifically important early tetrapod footprints from the Carboniferous of the Midlands (UK), using photogrammetry to create 3D models of footprints for analysis. The project generated new insights into how increasing aridity drove the rise of reptiles and was published in the peer-reviewed journal PeerJ (Meade et al. 2016). Luke has also had the opportunity to explore palaeobotany in a project that assessed the anatomy of early Carboniferous seeds using 3D models based on tomographic data from historic serial peel slides. Luke’s fourth-year master’s project focused on reconstructing late Permian dicynodont skulls, preserved within ironstone nodules, from CT scans in order make detailed anatomical descriptions of the material and generate endocasts of the braincase. 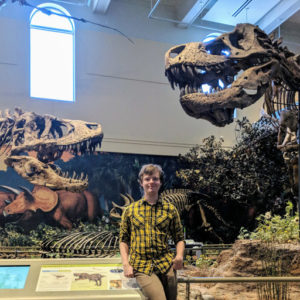 Case received an undergraduate degree from the University of Florida with a double major in Zoology and Geology in 2018. Before beginning his postgraduate studies, he completed a year of work study in the Vertebrate Palaeontology section of Carnegie Museum of Natural History in Pittsburgh. After four years of experience with the preparation and description of fossils (three years under Jonathan Bloch and one year under Matthew Lamanna), Case wanted to dig deeper at HKU.

While we may never be able to turn long-dead bones into a living animal, modern technology does allow us to do the next best thing and turn them into machines. Modeling limbs as lever systems reveals how quickly an animal could move, finite element analysis can recreate the complex strength relationships in skulls to see what they could have eaten, and reconstructing the neck and trunk muscles of an animal may even give insight to exactly how they fed. All of these techniques have been well-established in the realm of non-avialan dinosaur palaeontology, but are nearly absent in the study of fossil avialans. My PhD goal is to apply these techniques to one of the most fascinating fossil clades and expand them even further with the unique detail and soft tissue preservation found in Chinese Mesozoic fossil avialans.
Email: devedrus@connect.hku.hk
Location: Hui Oi Chow 302, HKU
Teaching: TA for HKU Dinosaur Ecosystems MOOC and the Master’s level course GEOS7021 Geological Fieldwork
Publications:                                                                                                            Seymour, R.S., Bosiocic, V., Snelling, E.P., Chikezie, P.C., Hu, Q.H., Nelson, T.J.,  Zipfel, B., Miller, C.V. 2019. Cerebral blood flow rates in recent great apes are greater than in Australopithecus species that had equal or larger brains. Proceedings of the Royal Society B, 286: 20192208.

Project on dinosaurian material from the Late Jurassic of Lesotho.

As part of our integrative research approach we collaborate with a range of international experts from different fields. Here is a selection of project collaborators both past and present: 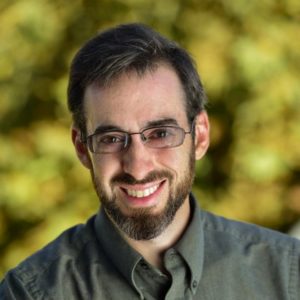 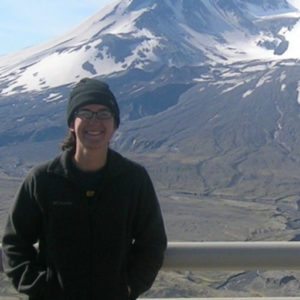